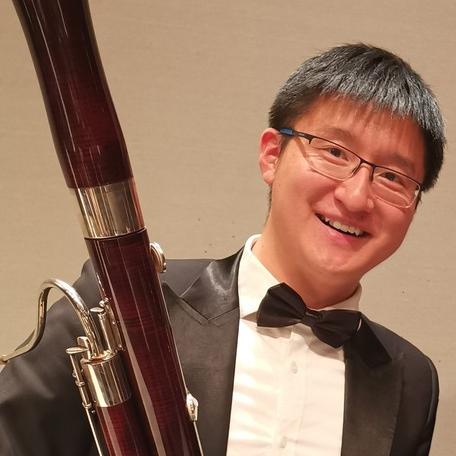 Hailing from central China, Mingyuan “Myles” Yang began his US journey by winning First Prize at the International Double Reed Society (IDRS) Young Artist Bassoon Competition held at the University of Redlands, California in June 2013. Since then, Yang has worked his way to principal bassoon with the Dubuque Symphony Orchestra, second bassoon with the Lansing Symphony Orchestra and acting second with the Columbus Indiana Philharmonic. He is also a dedicated bassoon teacher, holding the Associate Instructor of Bassoon at Indiana University and serves on the bassoon faculty in the Indianapolis Metropolitan School District.

He was one of the three winners in the WMU School of Music’s 54th and 56th Annual Concerto Competitions. His performances with the Western Michigan University orchestra of the Mozart bassoon Concerto in B-flat Major and the Hummel bassoon Concerto in F Major were both broadcast by National Public Radio Station WMUK.

Yang also performed the Concerto in E Minor by Vivaldi at the IDRS conference in 2013. He has been a member of the International Double Reed Society since 2013 and a member of Pi Kappa Lambda (National Music Honor Society) since April 2016.

As a scholar, Yang has researched many non-bassoon compositions and recently finished arranging all eight Mozart wind concertos for bassoon. These versions are published by Potenza Music Publishers and are available online at PotenzaMusic.com and at JustForWinds.com.

As one of the founding members of the National Youth Orchestra of China, Yang worked with the orchestra for many years and presently serves as its general manager.