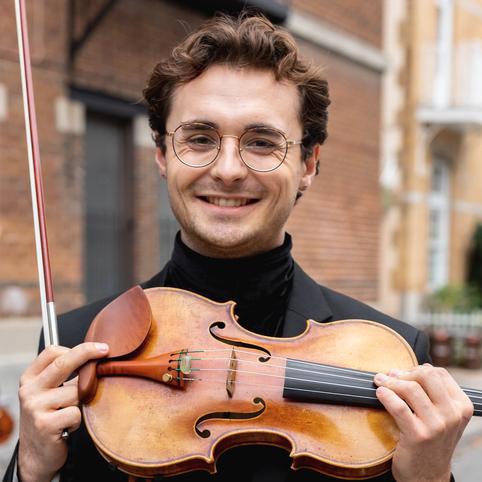 Canadian violinist William Thain gave his concerto debut at age 13 with the Brampton Symphony Orchestra. He recently received his master’s degree in violin performance while studying with Danielle Belen at the University of Michigan, where he currently holds an instructor position in the pre-college division. He also completed a Graduate Certificate in Arts Entrepreneurship and Leadership and was the recipient of the 2022 Performing Arts EXCELerator Fellowship through U-M as a co-founder of the Montréal-based Ensemble Urbain, a conductorless ensemble specializing in performing works by underrepresented composers. William previously completed a bachelor’s in violin from McGill University in Montréal and an ARCT Diploma from the Royal Conservatory of Music in his hometown of Toronto.  He has held concertmaster and principal second positions at McGill, the University of Michigan, and the Credo Festival Orchestra, where he collaborated with Rachel Barton Pine and Matthew Lipman.  He has attended summer festivals including Apple Hill, Credo, Colorado College, Orford, SoundingPoint Academy, Cavani Quartet International Quartet Seminar, and Center Stage Strings, where he has worked as head session assistant. He has performed with artists including Danielle Belen, Annie Fullard, Fabiola Kim, Simon James, Leo Singer, Horacio Contreras, and Mi-Eun Kim. William has previously studied with Axel Strauss, Alexander Read, Richard Roberts, Arkady Yanivker, and Janet Wilchfort. William plays on a 2017 interpretation of a Golden Period Stradivarius made by Mark Schnurr in Flesherton, Ontario.