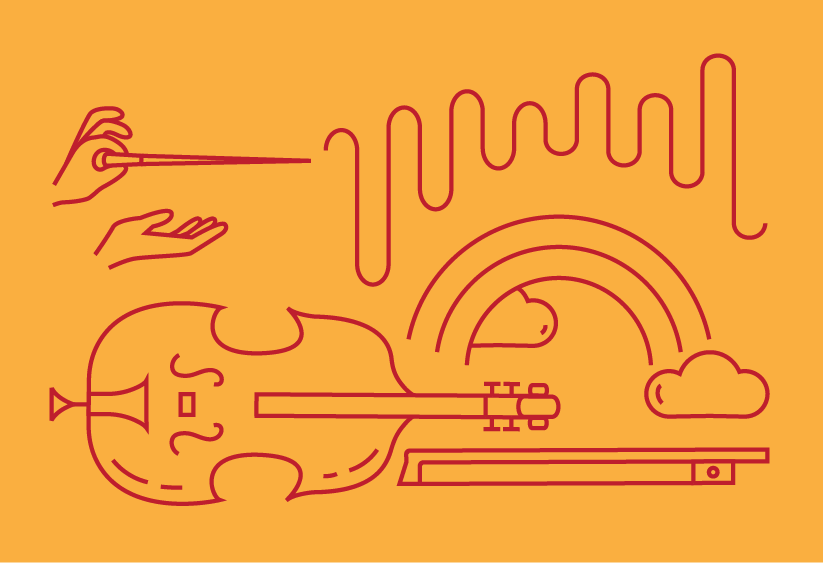 The Lansing Symphony begins their 93rd season with "Bloom", a world premiere by LSO’s Composer in Residence Patrick Harlin. Also on the program, Adé Williams, Sphinx Competition Prize Winner, will join the symphony to perform the colorful and sonorous "Violin Concerto" of Samuel Barber. Known for revolutionizing the world of ballet music, Pyotr Ilyich Tchaikovsky’s symphonic style often reflected those same dramatic and expressive elements for which his dance music was celebrated. His "Symphony No. 5" is filled with the depth of expression and voluptuous orchestrations that has made this work, and this composer, a perennial favorite.

Patrick Harlin is in his fourth year of the Lansing Symphony’s first ever Composer in Residence program. (The residency was supposed to last only three years, but—COVID). Last year the Lansing Symphony performed his River of Doubt at the beginning of the season and ended the season with the world premiere of his Earthrise. Lansing audiences will be proud to know that a piece that was premiered just a half-year ago at the Wharton Center is already being programmed by other orchestras. This season features two premieres written specifically for the Lansing Symphony.

Much of Patrick’s music uses something called a “program”—an extra-musical idea or story that the music is “about.” (A symphony by Brahms is not programmatic music; it’s all just about the music. A tone-poem by Strauss about the mischievous pranks of Till Eulenspiegel is. Some symphonies by Beethoven and Mahler are programmatic, some are not. It’s complicated.) “I generally use a program because I find it helps people into the music if it’s their first time,” Patrick says. “And with a premiere, it’s always their first time.” Most of Patrick’s music has something to do with the natural world and the environment. But tonight’s piece, Bloom, is not programmatic. “It’s just a look at the way things grow in sound and in the environment.”

Bloom is an outgrowth of a piece that Harlin wrote for the harpist Yolanda Kondonassis called Time Lapse.

"I keep thinking about the way we experience time as human beings. Conceptually, music really allows me to engage with that idea. . . . In my music, I often have an idea that comes back at different time scales. The rhythm remains the same, but the time span in which you experience that idea is different. There is a built-in speeding up and slowing down, without the tempo actually changing.

Sometimes you sit and listen to music and it feels like it’s the longest thing you’ve sat through and it’s only been four minutes! But the opposite can happen when the music is 30 minutes long and you feel like it’s over in a snap. As we get older, we experience time differently than when we were younger. It’s been three years since the pandemic started, and there’s been a weird sense of time being different. We’re not even sure when a certain event happened. You can listen to Bloom as if you’re looking at a time-lapse video of things blooming. It’s getting at the idea that humans experience time one way and plants and animals experience it quite differently."

The last piece that Patrick will write for the Lansing Symphony will premiere on the last Masterworks concert of the season and will feature Clayton Stephenson on the piano. The title of the piece is The Fourth Pedal. By adding a fourth pedal to the standard three of a normal concert grand, Patrick is hoping to bring a decidedly nineteenth-century technology into the twenty-first century. Be there!

Samuel Barber knew his destiny early on. As a young boy, he wrote a note to his mother. “I was meant to be a composer, and will be I’m sure. I’ll ask you one more thing – Don’t ask me to try to forget this unpleasant thing and go play football – Please.” He entered the first class at the Curtis Institute of Music when he was only fourteen and went on to become one of America’s premier composers. The broad American public got its first real taste of Barber’s music in 1938, during a radio broadcast of two of his works (the First Essay and the Adagio for Strings) conducted by Arturo Toscanini. Unlike his peers, he did not consider himself a modernist. His early music combined a Romantic lyricism with a sure handling of Classical forms, much as Brahms had done several generations earlier. His later works, though more dissonant, still retained a sense of rhythmic and tonal direction.

Barber’s Violin Concerto, completed in 1940, is a pivotal work, looking nostalgically to the past, but with an eye toward the future. The first two movements of the piece are conservatively “neo-romantic,” while the finale is more dissonant, aggressive, and irregular.

Samuel Fels, famous for Fels Naptha Soap and a member of the board of trustees of the Curtis Institute of Music, offered Barber $1,000—with $500 paid in advance—to write a violin concerto for his adopted son, Iso Briselli. Barber worked on the concerto while he was in Switzerland and sent the first two movements to Briselli. The young violinist eagerly accepted the movements and then suggested that the third movement be more virtuosic. Still in Europe, Barber continued to work on the concerto but was interrupted when the Nazis invaded Poland and all Americans were advised to leave.

Back in the states, he showed the third movement to the soloist. He was disappointed. It was too lightweight and didn’t seem to fit with the other two. He asked Barber to rewrite it. Barber didn’t relent. “I could not destroy a movement in which I have complete confidence, out of artistic sincerity to myself,” he wrote. “So we decided to abandon the project, with no hard feelings on either side." He was "sorry not to have given Iso what he had hoped for." Briselli’s teacher Albert Meiff wrote a blistering letter to Fels with a point-by-point criticism of the concerto. He didn’t like the first two movements at all, volunteered to help rewrite them, and suggested that Barber write the third movement with his consultation.

The upshot is that without a rewrite, Briselli declined to premier the piece. Instead, Albert Spalding gave the first performance with the Philadelphia Orchestra in February 1941. (Barber and Briselli did remain friends throughout their lives.) Barber got to keep the $500 advance, but apparently Fels didn’t pay him the remaining $500. Without Albert Meiff’s suggestions the concerto quickly gained a place in violinists’ repertoires and has become one of the most frequently performed 20th-century concertos.

The first movement consists of two main themes developed in traditional concerto form. The soloist begins quietly with a long uninterrupted phrase that leads into a perky, jazzy second theme introduced by the clarinet. The second movement is even more hushed and song-like than the beginning of the first. It begins with a beautiful oboe solo. Eventually the movement rises to a terrific climax, but returns immediately to the melancholy mood of the opening. The finale opens with a brief rhythmic timpani solo, which is taken up in turn by the solo violin and orchestra. A sense of perpetual motion drives the entire movement with the violinist playing almost nonstop. A sudden change of pace leads to a brilliant conclusion.

By the time Tchaikovsky reached what we nowadays call “middle-age” he was a composer of international fame. However, he was in the throes of a mid-life crisis. He confided his worries to his patron Nadezhda von Meck:

"I’m terribly anxious to prove not only to others but also to myself that I’m not yet played out. I often have doubts about myself, and ask myself—hasn’t the time come to stop . . . hasn’t the source dried up? . . . How is one to know whether the time hasn’t already come to lay down one’s arms?"

He wrote that letter twelve days before he completed his Fifth Symphony, a work that he started less than one month earlier! Ten years separated the composition of the Fourth and Fifth symphonies, but both deal with the central idea of “Fate.” When he wrote his Fourth Symphony, Tchaikovsky explained its meaning to his patron:

"This is Fate, the force that prevents our hopes of happiness from being realized, that jealously watches to see that peace and happiness not be complete or unclouded. . . . Life is a continuous, shifting, grim reality."

He wasn’t quite as helpful explaining to anybody about the meaning of his Fifth Symphony. However, in the 1950's Nicholas Slonimsky discovered an enticing tidbit among Tchaikovsky’s notebooks:

The “Fate” theme in the Fifth Symphony makes its appearance in all four movements, each time in a different guise. In the first movement, it is quiet and resigned. In the second, it interrupts impassioned romanticism with loud hostility. It is a faint echo at the end of the third. It sounds in a major key in the fourth movement, an attempt to turn “defeat into triumph.”

After the introduction of the “Fate” theme, the first movement seems to alternate between march and waltz, triumph and tragedy. It ends in a sullen mood. The horn plays one of Tchaikovsky’s most famous melodies in the second movement, accompanied by a lush bed of chords in the strings. The entire movement is one long romance with rising and falling passion. The third movement is a melancholy waltz of the sort that Tchaikovsky would later put into his famous ballets. The fourth begins with the stateliness of a graduation march but soon changes into a highly charged finale where the “Fate” theme plays a central, more optimistic role.

Tchaikovsky was delighted to prove to himself that he wasn’t washed up. “Heaven be praised, it isn’t inferior to the earlier ones,” he wrote. But those feelings wouldn’t last. Critics weren’t all that positive. By the end of the year, Tchaikovsky had his doubts:

"I have become convinced that this symphony is unsuccessful. There is something repellant about it, a certain patchiness, insincerity and artifice. . . . The realization of all this causes me a keen, tormenting feeling of discontent with myself. Have I really already, as they say, written myself out, and am I now only able to repeat and imitate my old former style?

Not quite. The public has made this one of the most popular symphonies in the entire repertoire.