Shostakovich Cello Concerto No. 1: "For the People" 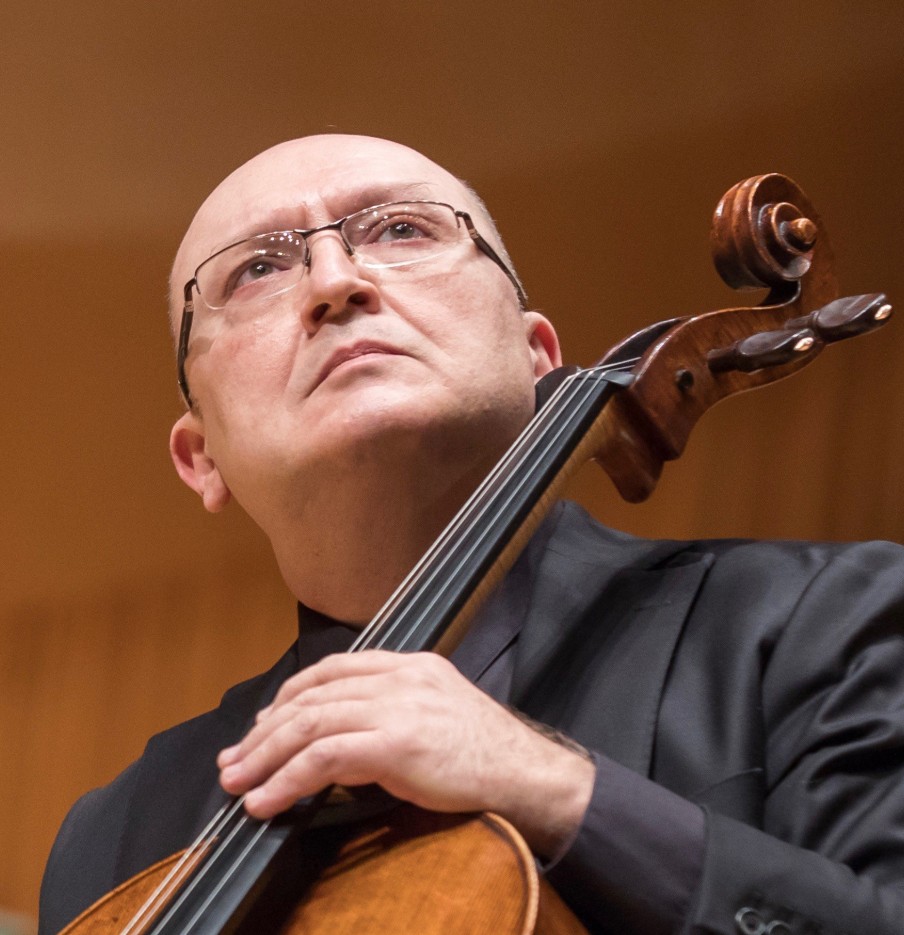 Join the symphony and Lansing’s own Suren Bagratuni for this awe-inspiring concert. The evening will feature popular works from the Romantic period to the Modern era, including pieces by Dvořák, Shostakovich, and Composer-In-Residence Patrick Harlin.

After losing re-election to the presidency running as a third-party candidate, the habitually peripatetic Theodore Roosevelt went on his last foreign expedition, this time to South America to find the headwaters of the Rio da Duvida (River of Doubt). Composer Patrick Harlin elaborates:

In 1913, with the exception of Antarctica, South America was the least charted continent. The Teddy Roosevelt/Rondon expedition —named after Cândido Rondon (1865–1958), a Brazilian military officer who remains as important a figure in Brazil as Roosevelt does in the U.S.— was in many ways a disaster. One member of the team turned on another and was murdered. The killer was left behind to die. Even the legendarily tough Roosevelt barely made it out alive. After suffering a major injury in one of the rapids, Roosevelt had to be persuaded to continue down river. (Teddy feared his continuation would slow things down and put the remainder of the members in mortal peril.) By the end of the ordeal, Roosevelt was a ghost of his former self, fifty pounds lighter and thought to have sustained injuries that ultimately shortened his life.

The Amazon is full of mystery:

Expedition members nearly starved in one of the most lush and biodiverse regions in the world. It was later uncovered that the expedition was shadowed by indigenous tribes living in the dense jungle (for whom Cândido Rondon was a tireless advocate) over a large portion of their expedition.

Expedition member and naturalist George Cherrie wrote of the night soundscape, “Let there be the least break of harmony of sound, and instantly there succeeds a deathlike silence, while all living things wait in dread for the inevitable shriek that follows the night prowler’s stealthy spring.”

In 2014, Patrick Harlin wrote a grant to travel to the Amazon to record soundscapes. He hired indigenous guides to help lead him into remote parts of this basin, not unlike those experienced by Roosevelt and Rondon. He then wrote River of Doubt to celebrate the 100th anniversary of the Roosevelt/Rondon expedition. Harlin gives further explanation of his work:

I agree with George Cherrie. It is not the sounds but rather the sudden cessation of sound that causes alarm. While the historical record of the River of Doubt expedition is rich, the music is not strictly programmatic. Rather the story of this expedition serves as a launching point for a musical journey into the unknown, a portrait of foreign landscapes, of fog on an unexplored river punctuated by birdcalls, the grandeur of the cloud forest landscapes, and the lives of two extraordinary figures Cândido Rondon and Theodore Roosevelt.

Each of the three movements takes on a different aspect of this story:

I.    River of Doubt is an entry into the unknown, a decision which offers no option of turning back
II.    Aurally depicts the grandeur and continually evolving landscapes of the Amazonian Cloud Forest
III.    Is an examination of excitement of exploration through the boundless energy and influence of the indigenous advocate and explorer Cândido Rondon.

Patrick Harlin is the Lansing Symphony’s first ever Composer in Residence. He was raised in the Pacific Northwest and earned his bachelor’s degree from Western Washington University and doctorate from the University of Michigan. Patrick’s interdisciplinary research in soundscape ecology—a field that aims to better understand ecosystems through sound—has taken him to imperiled regions around the world. Lansing Symphony audiences will have the opportunity to hear the world premiere of a work written especially for the orchestra at the end of this season.

If you were a composer in the Soviet Union during most of the twentieth century, the sort of music you wrote could get you in a lot of trouble. Dmitri Shostakovich twice found himself in such a situation with the Soviet authorities. The first time came in the mid-1930's during what is now called “The Terror.” In an article entitled "Muddle instead of Music"—probably written by Stalin himself—Shostakovich was accused of the worst possible artistic crimes. He was a "bourgeois aesthete" and a "Formalist." Curiously, the dreaded knock on the door never came. Then, in 1937, after the premiere of his Fifth Symphony—his supposed "Practical Creative Reply to Just Criticism"—his reputation was restored.

The second condemnation came in 1948. This time, Andrei Zhdanov, Stalin's henchman in the cultural bureau, announced "Soviet music was threatened by an invidious 'Formalist School' whose methods were radically wrong." The composer Krennikov declared almost everything written by Shostakovich to be "frantically gloomy and neurotic" and "alien to the Soviet People." The bureaucrats ordered the destruction of all of Shostakovich's recordings. His scores were recycled to save paper. He “waited for his arrest at night out on the landing by the lift, so that at least his family wouldn't be disturbed." Nadezhda Mandelstam described the mood of the times:

“Nobody trusted anyone else, and every acquaintance was a suspected police informer. It sometimes seemed as though the whole country was suffering from persecution mania. . . .” For Shostakovich, it meant that he essentially quit composing serious music for public performance for the next five years—until Stalin’s death in 1953. (Even then, the political “thaw” overseen by Stalin’s successor Nikita Kruschev didn’t completely ease the pressure on the arts and artists, as the furor over Boris Pasternak’s Doctor Zhivago attests.)

Shostakovich wrote his First Cello Concerto for his friend Mstislav Rostropovich. “[He] is a real Russian; he knows everything and he can do anything,” Shostakovich said about him. “I’m not even talking about music here, I mean that Rostropovich can do almost any manual or physical work and he understands technology.” For his part, Rostropovich describes the first encounter with the concerto:

Shostakovich gave me the manuscript of the First Cello Concerto on August 2, 1959. On August 6, I played it for him from memory, three times. After the first time he was so excited, and of course we drank a little bit of vodka. The second time I played it not so perfect, and afterwards we drank even more vodka. The third time I think I played the Saint-Saëns Concerto, but he still accompanied his Concerto. We were enormously happy . . .

The cello begins the concerto with a sardonic march-theme. Biting figures in the orchestra accompany the more lyrical sections, and the intensity rarely lets up in the first movement. The second movement, tender and sad, often has the cellist playing very high harmonics on the strings—a favorite sound of Shostakovich. The third movement is an impassioned monologue for the cellist. It leads directly into the fourth movement, bringing back the orchestra and its sardonic flavor. A rollicking waltz intrudes and tries to lighten up the character. Instead, the march from the first movement returns and brings the concerto to a twisted and frenetic close.

Dvořák’s Ninth Symphony (commonly known as the New World Symphony) is easily one of the most popular symphonic works in America. Surprisingly, not everyone thinks that it is Dvořák’s best symphony. In an extended review of the Ninth Symphony’s premiere in the Musical Courier, James Huneker wrote “Antonín Dvorak is a genius—no question about that. His new symphony does not, however, prove it, as much as the two earlier ones in D [major] and D minor. . .”  That symphony in D Major is tonight’s Symphony No. 6.

When Antonín Dvořák wrote his Symphony in D Major in 1880, he was in the midst of a particularly fruitful period of his life. He was finally a well-known composer in his own country, and thanks to the efforts of Johannes Brahms and others, he was gaining a reputation outside of Bohemia. He was now somewhat financially secure, too, thanks to yearly stipends he received from the state. Dvořák was writing a lot of music, most notably his Slavonic Rhapsody and his Slavonic Dances, which made him something of an international phenomenon.

In 1879, Dvořák was in Vienna to hear a performance of his Slavonic Rhapsody No. 3. The orchestra and audience loved it, and the conductor, Hans Richter, was so thrilled with the work that he asked Dvořák to write a symphony for the Vienna Philharmonic. He started work on the symphony in August and finished it two months later. Hans Richter never got to conduct the premiere, however. It seems that the players objected to presenting the works of a young, new composer two seasons in a row. Instead, Adolph Čech conducted the first performance in Prague.

This symphony, although the sixth symphony that Dvořák wrote, was the first one to be published. It was originally called Symphony No. 1. In it Dvořák demonstrates a full command of the symphonic form and you will hear what James Huneker meant when he wrote:

Dr. Dvorak has much of the naïve, sunny and fertile qualities of Franz Schubert, and he is to be praised for not giving us huge doses of pessimism we find in the spirit of Brahms and Tchaikovsky's music. He is still a child at heart, and he takes you into his forest, where there are also many-colored flowers, and bids you pluck and be gay. The sun is bathing naked in the azure and God is yet with the world.