Gustav Meier was Music Director of the (Greater) Lansing Symphony Orchestra from 1978 to 2006 and was given the honor of Music Director Emeritus. He is known internationally as a teacher of conductors. He has led orchestras around the globe while teaching at Yale University, the Eastman School of Music, the University of Michigan and the Tanglewood Music Center.

Mr. Meier has received Honory Doctorate Degrees from Fairfield University, Kalamazoo College and Michigan State University and has been awarded with the Ditson Prize for his commitment to American Music. He is also the recipient of the Harvard Luise Vosgerian Award, the Max Rudolf Award of the Conductors Guild and the Distinguished Faculty Award from the University of Michigan.

His book The Composer, the Orchestra and the Conductor was recently published by Oxford University Press. 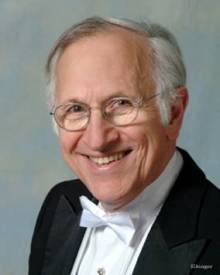