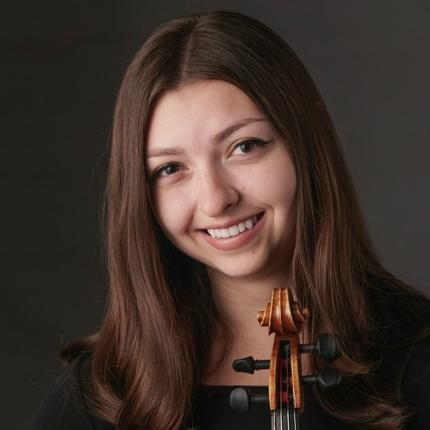 Hannah Breyer is a recent graduate from the University of Michigan, where she studied under the tutelage of Yizhak Schotten. Originally from Gilbert, Arizona, Hannah began playing viola at age 10. As a freshman in high school, she had the honor of performing at Carnegie Hall with the Mesquite High School Symphony. During her time as an undergraduate at the University of Oregon, where she studied with Dr. Leslie Straka and Dr. Arnaud Ghillebaert, she earned a position with Rogue Valley Symphony in Ashland, Oregon and performed with the Eugene Symphony, the Oregon Mozart Players, and the ballet company OrchestraNext. For the entire academic year of 2016-2017, she studied modern and baroque viola at the Staatliche Hochschule für Musik und Darstellende Kunst (State University for Music and Performing Arts) in Stuttgart, Germany on a full-tuition scholarship from the German Academic Exchange Program. In culmination of her bachelor’s degree, she was awarded the Outstanding Undergraduate Performer in Strings award.

Since attending the University of Michigan, Hannah has also won positions in the Flint Symphony and Ann Arbor Symphony and performs as a freelance musician with several orchestras throughout the lower peninsula. She is certified to teach Suzuki violin and viola and has acted as a substitute mentor for the Detroit Symphony Orchestra’s Civic Youth Ensembles program. She also taught as a Chamber Instructor for the University of Oregon’s Community Music Institute. Hannah concluded Master of Music degrees in both Viola Performance and Chamber Music in the spring of 2020 and continues to engage in chamber music with her colleagues at the University of Michigan.