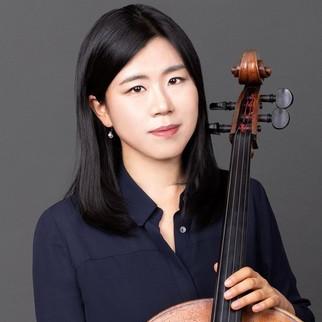 She began her studies on the cello at the age of eight. She received a Bachelor of Music from Ewha Womans University in South Korea, where she studied under Sun Yee Chung and Il-Hwan Bae.  She completed Masters of Music and Doctor of Musical Arts degrees under Suren Bagratuni at Michigan State University, where she received awards and grants such as the Welton Family Endowed Fund, the Dr. Stanley and Selma Hollander Endowed Scholarship in Cello, and the Music GOP Fellowship. In addition, she was a graduate teaching assistant from 2013 to 2016.

She had a debut concert in Kumho Art Hall in Seoul, Korea in 2011. In November 2013, Kim played in a master class for cellist Yo-Yo Ma at the Fairchild Theater at MSU. In the same month, she won the Michigan State University honors competition and performed as a concerto soloist with the MSU Symphony Orchestra in March 2014 at the Wharton Center. This performance was radio broadcasted with 90.5 WKAR (Public Media from Michigan State University) several times. Kim has also performed twice at Carnegie Hall, New York for the American Protégé International Piano and Strings Competition 2016 Winners Recital and again as a first prize winner of the 2019 Golden Classical Music Awards.