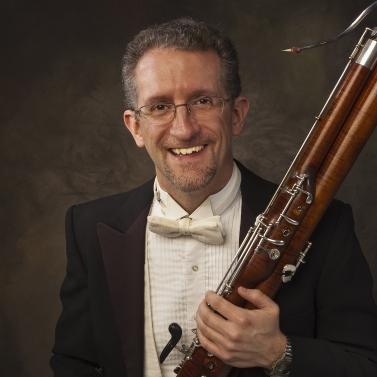 Michael Kroth is professor of bassoon and associate dean for undergraduate studies at the Michigan State University College of Music.

Kroth has earned a reputation as an excellent solo, chamber and orchestral musician, having performed in recitals and concerts throughout the United States, Europe, Colombia and China. His performances of both serious and novel works for bassoon have been well received by audiences and critics, and he has been praised for his beautiful tone and expressive playing.

Prior to his appointment at MSU, Kroth was principal bassoon with the South Dakota Symphony and Dakota Wind Quintet. He has also held positions as principal bassoonist with the Air Force Academy Band and the Colorado Springs Symphony Orchestra. Former teaching positions include Augustana College (SD), the University of Sioux Falls, University of South Dakota, and the Colorado College.

Kroth has presented master classes and clinics at colleges and universities throughout the United States including the Eastman School of Music, the Oberlin Conservatory and the Interlochen Arts Academy. He has also presented master classes and performed at several International Double Reed Society Conventions, the Midwest Clinic International Band and Orchestra Conference, the Music Middle School of Shanghai Conservatory, and in outreach work in Medellin, Colombia.

He received degrees in bassoon performance from Ithaca College and Temple University in Philadelphia. His major teachers include Edward Gobrecht, Bernard Garfield and Ryohei Nakagawa. His performances can be heard regularly on National Public Radio, Colorado Public Radio, Minnesota Public Radio and South Dakota Public Radio. He has released recordings on the Sound Works, Ultrasound, AFSC and HCS labels.