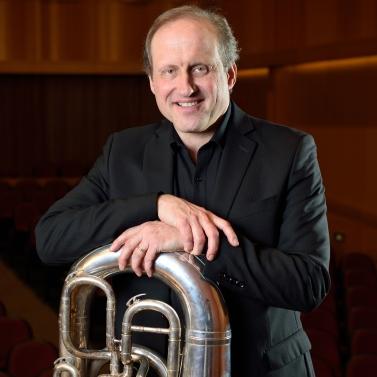 Philip Sinder is professor of tuba and euphonium at the Michigan State University College of Music. His students are found in performance and teaching positions throughout the United States, and have won awards in numerous performance competitions. Sinder has performed with many leading ensembles, including the Detroit Symphony, Chicago Symphony, St. Louis Symphony, Mariinsky Orchestra, and Houston Symphony. He has served for many years as principal tuba with the Lansing Symphony, and has appeared twice with the LSO as soloist. Sinder is also a founding member of the Brass Band of Battle Creek, and performs frequently with the Grand Rapids Symphony, Michigan Opera Theatre, and the Beaumont Brass Quintet of MSU. His solo tuba recording, “Aerodynamics”, has received strong critical acclaim, and he has performed on over 20 large ensemble and brass quintet recordings. In 2009, Sinder was the recipient of the Withrow Excellence in Teaching Award at Michigan State University, and in 2017 he received the International Tuba Euphonium Association Excellence in Teaching Award. He currently serves as chairman for the Leonard Falcone International Euphonium and Tuba Festival, and since 2005 has been a Valade Teaching Fellow at the Interlochen Arts Camp. Sinder earned a Bachelor of Music Education degree and Performer’s Certificate from the Eastman School of Music, and a Master of Music degree from Wichita State University.